Clay Township, located in St. Joseph County, Indiana, was formed in 1840 and is located directly north of South Bend, extending to the state line of Michigan. 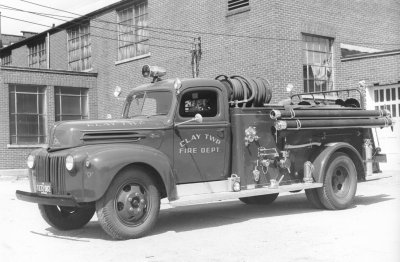 On June 11, 1947, the Clay Township Trustee and his advisory board announced at a meeting that the township would purchase firefighting equipment and start its own fire department. In January 1948, the first pumper was delivered and put into service. This truck was housed at Clay High School in an unused garage. There were 3 full-time firefighters hired and 70 volunteers were trained. The Clay Township Fire Department was the first township fire department in St. Joseph County.

In 1950, the Township built its first fire station located at 18776 Cleveland Road. Over the course of the next 50 years, the station was remodeled twice, providing office spaces for the Township Trustee and the Township General Assistance Office as well as extra space for the fire department.

In 2013, the Station was renumbered from Station 1 to Station 21 to align with other departments in St. Joseph County. This station receives 46% of all calls for service.

In 1961, Station 2 was constructed at 18355 Auten Road. The station received a major renovation in 1999, including the addition of an extra apparatus bay and a 2-story office/living area. Following this renovation, the fire department administration and Clay Civil Township offices relocated to the Auten Road station. Station 22’s response area covers the northern half of Clay Township and is mostly composed of residential occupancies. This station covers approximately 7.5 square miles and receives 16% of all calls for service.

Currently, Station 2 is staffed with 2 full-time shift firefighters and 1 part-time firefighter that provide 24-hour staffing for 1 engine. The Deputy Fire Marshal serves as the tanker engineer Monday through Friday, with part-time personnel filling this position in the evening and weekends. The following staff generally respond out of Station 22 during standard business hours:

In addition to the above-mentioned engine, this station houses a:
In 2010, a full-time mechanic was hired to meet the growing needs of the agency. A bay was dedicated to the Support Service Division for maintenance. In 2013, the station was renumbered from Station 2 to Station 22 to align with other departments in St. Joseph County.

In the 50-plus years after the creation of the Clay Township Fire Department, the Township experienced a growth of population to approximately 38,000 residents. This was accompanied by an increase in the number of calls for emergency fire and medical services. While call volume increased 450% from 1975 to 2000, the number of full-time firefighters remained unchanged over the same period. While numerous factors contributed to this situation, one of the most significant was the issue of limitations in how much the tax levy could be increased. In response to this issue, Clay Township and the incorporated towns of Indian Village and Roseland elected to create a fire territory.

In 2001, the Clay Township Fire Department was reorganized into the Clay Fire. At the time under Indiana law, fire territories were subject to different levy standards, which allowed the growth of the fire department to catch up with the population and call volume it covered. The original creation of the Clay Fire allowed for the hiring of an additional 6 full-time shift firefighters and a full-time Training/Safety Officer in 2002, as well as 9 full-time firefighters in 2006, for a total of 34 career firefighters.

In 2004, Clay Fire became the 1st Accredited Fire Department in Indiana by the Center for Public Safety Excellence (CPSE). As of 2015, there are still only 3 in the state.

This firehouse was remodeled in 2007 in order to accommodate the 24-hour staffing. Station 23’s response area, which is comprised mostly of residential occupancies, covers 6 square miles, most of which is unincorporated German Township. Station 23 responds to 8% of all calls for service. In 2013, the Station was renumbered from Station 3 to Station 23 to align with other departments in St. Joseph County.

Prior to the merger, German Township had maintained a 2nd station on Keller Road south of the South Bend Regional Airport which is now labeled as District 26. This station was not manned and was eventually purchased by the airport. This area is isolated from Clay Fire’s other jurisdictions due to annexation and airport expansion. This area accounted for 1% of responses in 2013, of which 0% was fire-related losses. This district is covered by Station 23 apparatus, and enjoys automatic mutual aid from the Southwest Central Fire Territory (SWCFT). SWCFT Station 41 is less than 1.5 miles from this area and is staffed 24-hours a day with a 3-person pumper/tanker. As such, SWCFT units generally arrive prior to Clay Fire apparatus.

In 2009, Clay Fire was awarded Reaccreditation by the CPSE.

On January 1, 2010 the Harris Township Fire Department (HTFD) joined the Clay Fire, which added the unincorporated areas of Harris Township to the Clay Fire response jurisdiction. This merger added 22 square miles of response area and 22,000 residents, bringing the total jurisdiction of the Clay Fire to approximately 52 square miles and 66,000 residents. The former HTFD Station 2, located at 13981 State Road 23, became Clay Station 24 and is currently staffed by 2 full-time shift firefighters and 1 part-time firefighter. These 3 firefighters staff engine 24-hours a day.

In addition, there is a:
Re-orientation of the apparatus bays occurred in 2011 due to the widening of Indiana State Road 23. Station 23 responds to 12% of all calls for service. In 2013, the Station was renumbered from Station 4 to Station 24 to align with other departments in St. Joseph County. The agency’s pump testing is still done at this station.

The former HTFD Station 1, located at 12481 Anderson Road, became Clay Station 5 and is staffed by 5 full-time shift firefighters and 1 part-time firefighter. These firefighters staff an engine, an ALS Ambulance, and Battalion apparatus 24-hours a day. This station also houses a:
Station 25 responds to 8% of all calls for service. In 2013, the station was renumbered from Station 5 to Station 25 to align with other departments in St. Joseph County.

In addition to the on-duty staffing, the Clay Fire maintains an On-Call/Engineer/Part-Time Division of approximately 48 firefighters. These firefighters respond from home to:
Further, full-time firefighters are issued pagers and may respond off-duty to any of the above-mentioned calls.

Clay Fire was and still is a progressive fire department.

With the formation of MABAS 201 Tactical Rescue Team (TRT) in 2001, the need for a local training facility for TRT was discussed.


Reaccreditation
In 2014, Clay Fire was awarded Reaccreditation by the Center of Public Safety Excellence (CPSE) for a second time.

ISO Insurance Service Office
October 1, 2016 - The communities served by Clay Fire -including Clay, German and Harris Township, as well as the Town of Roseland and Indian Villages - has received the latest Public Protection Classification from ISO.  The entire service are as received an upgraded score to an ISO Class 2 rating.